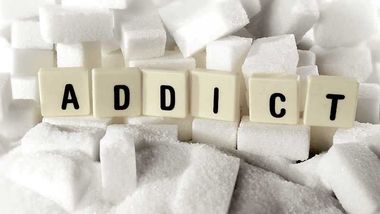 In that first meeting I went to for my sugar addiction, I heard others admit to doing the same things I did. Sneaking. Lying. Throwing food in the bin to halt a binge only to come back later and fish it out to eat.

It was right in front of my face, but I couldn’t see it for what it was for years. Addiction is a wayward beast. God knows you can’t see much when you’re laid flat on your back, pinned down by invisible yet ferocious forces.

The narrative was just so unfamiliar that I doubted it was real. Where were the used syringes, grubby spoons, and Ewan McGregor swimming in a lav to Brian Eno music? Where were the gin and tequila bottles strewn next to stained ashtrays?

A glance into my dependence only revealed brightly coloured plastic wrappers and packaging, crumbs strewn on the car floor, stomach pains, abominable flatulence, and soft velvety chocolate stains on the couch and seat of my pants. Far from Trainspotting or Leaving Las Vegas, this was more like Leaving Seven Eleven.

It was almost laughable, only it wasn’t, it was excruciating. I ate the way an alcoholic drinks and an addict uses. The notion that food could derail a person the way hard drugs or booze can sounds extreme. And whilst the destruction is not as ostensibly violent and as speedily lethal, my spirit was decaying.

When you’re enslaved by compulsion and obsession, no matter what the substance or behavior — you suffer. Your inner freedom withers away and you are caught in a most painful cycle.

I could not stop binge eating. And for some reason I never equated my lawless benders on sweet things as a bona fide addiction. Denial is blinding but it wasn’t only mine. I was seeking the help of health professionals — psychologists and health counsellors — who were also missing the reality of the problem. They would say “But it’s not that bad, right?” and minimize my behaviour in an attempt to make me feel better. But it was that bad, and their diminishing comments made me feel worse.

They were kind and well intentioned and approached the issue by trying to help me find moderation in my relationship with food, namely sugar: my white powdery blow. I’d find that balance for periods — sometimes days, weeks or even months — but I’d inevitably topple into blowout. And I’m not talking a couple of pieces of cake or a tub of ice cream.

There is a cultural denial around the legitimacy of sugar and food addiction and treatment for disordered eating is usually centered around balance. And that is the ideal solution. But what if that doesn’t work? What if the notion of moderation is the very thing that keeps some of us monumentally stuck?

My continual failure to eat “normally” left me bereft and berating myself for my inability to halt this self-abuse. I couldn’t implement what I was being advised to do. What in hell was wrong with me? I’ve never had a DUI for drunk driving, but I have shamefully dinged my car (and others) more than once as I scoffed food blindly from the passenger seat.

I’d swear off bingeing; writing and typing up resolutions only to rip them up or delete them when I’d inevitably slide into another spree.

Then one day the penny dropped when a health counsellor I’d been working with for four years said, “I’ve got it…You’re addicted to sugar!” Well yeah…anyone could see that, but what was her point?

She told me I needed to treat it like a legitimate addiction, find a support group, and face the fact I couldn’t eat processed sugar in moderation, which meant not eating it. At all.

Was Alicia able to refrain completely and beat her sugar addiction? Find out in the original article The Other White Powder: My Addiction to Sugar at The Fix.