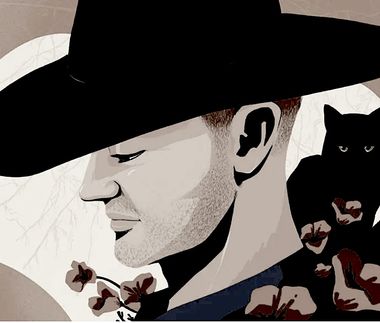 I’m not a “man’s man”: I don’t look or sound tough. My only gun is for caulking my shower. Plus I have anxiety, hereto named “manxiety.”

My life is a dichotomy in that I’ve spent years in taekwondo, love football and rodeos, but have an affinity for frozen yogurt, and watching Netflix with merlot and soy vanilla candles next to my cats, Thelma and Louise.

I attribute my temperament to genes and California hippie tap water.

The origins of personal traits, including anxiety, can be genetic, environmental, or inadvertently “seed-planted” by parenting. Male anxiety, or manxiety, can be contagious if you’re around it long enough. I should know.

My dad, a virile victim of indecisiveness, often had me second-guessing my own life choices, or not making one at all. To this day, I’m often paralyzed by an Applebee’s lunch menu or yellow traffic light.

Men are stalwarts of resolve… until we’re not We recognize that our cars and lawnmowers need tune-ups and diagnostic tests, but we rarely wash our feet in the shower, let alone visit a physician for our own checkups — especially for anything regarding the brain.

If you’re a man with anxiety, however, the norms become skewed and irrational.

I grew up a hypochondriac. I visited the hospital countless times per year while my parents spent innumerable sums on deductibles and copays.

What I thought was testicular cancer was an inguinal hernia from doing deadlifts. What I was certain was genital herpes was ingrown hair. What I feared was Lyme disease was an allergic reaction to grass. And what I accepted as a heart attack turned out to be… anxiety.

Only twice did I not go to a hospital when I should have.

The first was at 18 while having intense chest pains and labored breathing because I had unknowingly collapsed a lung. In my defense, I thought it was heartburn.

The second was when I intermittently peed blood over a 10-month stint.

The only thing worse than my fear of potential hospice was the anxiety of a pending appointment to put a camera up my urethra.

Consequently, I settled on platinum-level denial until I landed in surgery and chemo. Ignorance is a prickly muse. With chronic male anxiety, it’s torturous to determine what warrants an ER visit versus antacids.

And when it came to my mental health, I handled it like most men: denial, distraction, and drugs. In that order.

Most men with anxiety don’t accept it as the reason for their angst Denial and distraction might be why so many men walk around with addiction. In the absence of knowing any healthier coping mechanisms to life’s stressors, or a willingness to seek help regarding anxiety, we plug the holes however we can.

But if you treated any other disorder by ignoring or avoiding it, the outcome would be similarly grim. You can ignore asthma and diabetes for a while too. But every disorder has its dues.

My first coping tactic for anxiety was denial, lest I appear weak and vulnerable among my peers.

“While some may consider this a stereotype — that men do not seek help for mental health issues — it is statistically correct… men are much more stigmatized by any admission of a psychiatric illness and are much less likely to seek treatment,” says Dr. Sammie LaMont Moss, a psychiatrist with Kaiser Permanente in Denver, Colorado.

This is particularly troublesome as depression and anxiety in men are more likelyTrusted Source to manifest in substance misuse and suicidal behavior.

“We often see in the clinical setting that an attempt to address anxiety can manifest in different ways. For example, men will turn to substances like alcohol or cannabis for some immediate relief, which can cause long-term, harmful effects,” explains Moss.

How anxiety presents in men

I’m an exceptionally kind and empathetic guy, but anxiety makes me irritable and angry. If I’m forced to socially interact or deal with a rude stranger, I become a chupacabra with a flashpoint of Aqua Net. I try to determine when I’m feeling anxious before it defaults to a villainous persona.

But distinguishing between anxiety and moodiness can be difficult.

“Due to the social pressure that men experience based on the unwritten rule that men are to be strong and in control at all times, anxiety is not easily identifiable in men, even if that man’s anxiety has reached overwhelming levels” says San Diego psychologist and singer-songwriter Dr. Bruce Thiessen.

“Many of the symptoms may express [physically] in the form of medical problems or conditions, such as ulcers, back pain, hypertension, and the like,” Thiessen says.

“A lot of men have been told their whole lives to ‘man up’ or ‘be tough.’ It’s hard for many men to talk to someone else about their vulnerabilities, and one of the paradoxical truths about mental health is that the more a person — male or female — tries to bottle up their feelings, the more likely they are to develop a problem,” Siegel says.

If I simply ignored my feelings of angst, I could pretend anxiety didn’t exist for me. And when denying anxiety exacerbated problems, I turned to distraction, which also avoids addressing the core issue.

*How does chronic anxiety differ in men? *

“The most obvious signs of male anxiety are the physical ones,” says Dr. Lindsay Israel, psychiatrist and chief medical officer at Success TMS.

“Men might find themselves going to the emergency room or their primary care [doctor] with complaints of chest pain, fearful they’re having a heart attack,” she says.

Israel goes on to say, “Men are more likely to develop severe symptoms of anxiety and possibly develop an additional depressive disorder due to the lack of treatment intervention.”

“Men are also more likely to become aggressive and to develop problems in their relationships due to dysfunctional ways of expressing their anxiety,” he adds. “Many men turn to drugs, alcohol, gambling, and personally destructive sexual addictions to relieve chronic stress through escape.”

In my case, I wielded distraction-like artillery over my physical well-being. I overtrained in the gym, overran the trails, and overswam in the lap pool. But I also overimbibed alcohol.

I would later harm-reduce to cannabis edibles, tinctures, and vapes. And on a few occasions, I casually overdid those too.

So, what to do with all this ‘manxiety’? Men are historically hailed as fixers. It’s important to note that the acute stress that prompts us to do our taxes or flee a K-pop mob is healthy. Once anxiety becomes long-term or chronic, however, it can be detrimental to one’s physical and mental health.

“One of the best ways for men to become comfortable with accepting that he has a mental health issue is to speak to other people,” Moss says.

“Quite often a man will be surprised to learn how many other people are [being challenged by] similar difficulties. Finding out that you’re not alone can go a long way to help normalize what you’re experiencing,” Moss adds.

“Men need to feel accepted, and not judged, for showing both strength and [vulnerability]. Society might judge them, mental health [professionals] will not,” he says.

In almost every instance when I’ve revealed my anxiety challenges to another man, he’s replied in commiseration with his own. It’s indicative of the ratio and cross-section of some men who silently endure anxiety.

There are simple and clinically effective things men can do to lower their anxiety:

“This is also an area where group therapy, segregated by gender, may help — particularly for men who are stigmatized and think they’re being seen as weak or as a victim. Learning what other men experience can help break that stigma,” Moss says.

Moss encourages his patients to leverage smartphone apps like Calm, Headspace, and myStrength.

So are medications typically prescribed for anxiety.

Many people leverage a combination of meds and clinical therapy.

“Typically, it’s not any one modality that targets these symptoms for a person, it’s more often a combination of various modalities that gives the most optimal results,” Israel says.

More than just the “greatest hits” to contest manxiety, this is my own triage to maintaining a career, relationships, and a life largely unfettered by the cerebral minesweeper of anxiety.