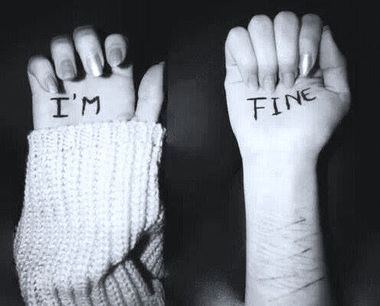 Sandy’s mother, Lily, is beside herself. “I didn’t notice anything was wrong all winter,” she said. “Oh, she was quieter than usual and her grades weren’t the best. But we moved last fall and I figured she was just adjusting. Last week, though, spring really came on with 80-degree days and she insisted on wearing a wool sweater to school. Sandy got furious when I told her to go change. I’ve never seen her that upset! Three days of long sleeved shirts and I finally caught on. I’d heard about this, of course. But I never thought my daughter would be doing it. There are scars all up and down her arms!” Lily was doing her best to hold back tears. “Sandy wouldn’t come here with me. She won’t talk to me. What can I do?”

Lily is upset and bewildered. She can’t understand why her beautiful, accomplished 14-year-old would do something so self-destructive and painful. She feels terrible that her daughter is hurting herself. She feels terribly guilty that she didn’t notice something that has apparently been going on for months.

Sadly, Lily’s daughter is not alone. Self-harm has become far more common than most parents suspect. Some studies show that 2 to 3 million Americans engage in some form of self-injury (cutting, burning, or striking themselves to the point of soft tissue damage) each year. There are people who self-harm at every age, socio-economic, and ethnic group.

Why do kids do it? Often they learn from peers that it can be a way to actually feel better. They may then read about it on the Internet. Sometimes it starts as an experiment; sometimes as as a response to a dare. Sometimes a group of kids try it out as a way to be cool. Sometimes it really does begin with an accidental injury. And, rarely, it’s the result of a failed suicide attempt.

That last possibility especially terrifies parents. But kids who self-harm generally are not looking for a way to end life. They are actually looking for a way to end emotional pain, Some have found that hurting themselves brings their anxiety and stress down to a manageable level. Others, who have learned to dissociate (distance themselves from their bodies and minds) when under stress, find that the pain of inflicting injury brings them back in touch with themselves. Self-injury for these kids is a way to stay alive.

Contrary to what some adults believe, self-harming is rarely a bid for attention. Most of these kids are ashamed of what they do and do their best to hide it. Ironically, the energy needed to keep it a secret only adds another stress. Some are mentally ill and although some may suffer from depression, most do not. The most common mental health diagnosis for a teen who self-injures is borderline personality disorder. For kids who self-injure, hurting themselves has become a primary coping skill in the face of challenging feelings or situations. Often these kids have also learned that their feelings are wrong or bad. Often they never developed less drastic ways to deal with stress.

Self-harmers need to be understood, not scolded. They need to unlearn the idea that their feelings are “wrong” and learn that it’s okay to feel them. Most important, they need to learn new ways to manage stress and emotions that they find overwhelming.

When asked a few questions about Sandy’s history, Lily revealed that she left her husband last summer after years of verbal abuse. “From the time Sandy was little, he’d yell at her that she was too sensitive whenever she cried. He would threaten that he’d give her something to cry about if she didn’t stop. He never actually hit her but I never knew if maybe this time he would. It was hard enough for me to put up with his rages but after a while, I couldn’t stand watching what he was doing to our daughter. When a possibility for a transfer with a raise came about, I just packed us both up and left. Funny thing is, she misses her dad.”

Since Sandy won’t hear of coming to therapy, my job is to coach her mother. Lily needs to know that we can work as a team and that I don’t see her as a neglectful mom. Sandy has put a good face on the move and has even expressed how relieved she is to be out of all the family fighting. Meanwhile, Lily has been caught up with learning a new job and doing the thousand things that go with settling into a new town – from learning where to shop to finding a new doctor and dentist for them both. It’s no wonder to me that discovering that her daughter is cutting is a surprise and a shock. It often is.

Lily’s first step is simply to validate Sandy’s feelings. It’s a reasonable guess that she both misses her dad and is angry with him; that she is glad her mother got her out of the situation, but feels guilty that she is glad. She both loves her mother and is angry with her for not only taking her away from her father but for taking her away from her home, her school, and her friends. It probably makes no sense to her that she is feeling all those feelings at once. Complicating things further is that she was raised by her dad to think that her sensitivities are somehow wrong.

Lily needs to let her daughter know that she understands how overwhelming and confusing the move has probably been for her and that there are ways to handle her feelings that don’t put her at risk of giving herself a serious wound or leave her with permanent scars. Yes, Lily needs to be the mom. But she can also let Sandy know that the reason she can be understanding is that sometimes she also feels mad and glad and sad about the move and wishes there had been another way to make things better.

Once Sandy feels supported and heard by her mom, I’m hopeful that she will come to the next appointment. If not, Lily can still be coached to help her daughter learn new ways to discharge the emotional buildup that happens when she keeps suppressing her feelings. We can teach her that physical exercise (dancing, running, going to the gym) can release the same relieving endorphins into her system that cutting does. We can teach her other ways to relax like taking a warm bath, listening to music or making art. And we can give her some coping skills. Deep breathing or washing her hands or or getting a cold drink of water can calm her while she works to get the urge to hurt herself under control. Most important, we can help her learn to value her feelings by keeping a journal and talking to her mom or a friend or even to me.

While all this is going on, Sandy also may need a little help fitting in with her new school and making friends. Lily had lost sight of how hard it is for a kid to move in the eighth grade. She agreed that she could be more encouraging about having other kids hang out at her place and be a little less focused on grades for now.

I’m certain that before we’re finished, we’ll also need to at least attempt to involve Sandy’s dad. She doesn’t miss his rages but there is more to him than a walking ball of anger. There were good times too. She loves the dad who shot hoops with her in the backyard and who joked around with her when he was feeling good. My guess is that he’s a guy who can’t tolerate his own feelings and who hated feeling out of control when his daughter cried. Perhaps if he feels understood, he’ll be open to working on himself and his relationship with his daughter. Lily is okay with the idea as long as she has assurance that we’ll prepare Sandy to deal with disappointment if her dad doesn’t respond.

Coaching Sandy’s mom like this may work. Not all “therapy” happens in an office. A loving mother who can listen, stay calm, and offer some practical advice can also give a young person exactly what she needs. Learning some concrete ways to be helpful and having some support gives Lily hope and focus. She’s highly motivated to do the best she can for her daughter.

If this method doesn’t work – or doesn’t work enough – my hope is that Lily’s efforts will help Sandy eventually feel okay about getting some additional support. She might come to see me, alone or with her mom, or she might be more comfortable joining a support group with other teens who are struggling to learn how to manage strong and sometimes contradictory feelings. Whatever path therapy takes, she’ll know her mom is there to help.